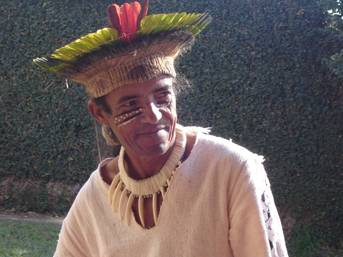 Pajé Tchydjo is a healer/ medicine man from the Kariri Xoco tribe of Alagoas, Northern Brazil. The Kariri Xoco are part of the very large Fulni-O group of indigenous tribes and have maintained their culture and traditions in spite of successive waves of immigration and colonisation over the last 500 years. They have a tradition of celebration – the Toré – involving dancing, body painting and singing, which is regarded as a healing ritual. People who have participated in these sessions report an effect of joyfulness and happiness which can last for weeks.  The Kariri Xoco call themselves “Filhos de Jurema” , sons of a native tree which is used in some of their ceremonies.

Tchydjo was trained from the age of 8 as a Pajé, a healer and medicine man for his tribe, and has been doing this work for over 50 years. For over a decade he has been leading Rodas de Cura, (the Toré rituals),  healing sessions, ceremonies and events for the non-indigenous  people of Brazil. He has a mission to communicate his philosophy , beliefs and medical and magical practices to the new Brazilians and to the rest of the world . There are a few very short video clips on the web of him working with schoolchildren in Brazil.

He has been invited to the UK by a Cambridge local who found him by chance in Rio Grande do Sul, the deep south of Brazil, doing healing ceremonies with herbs and fire. She was extremely impressed with him and took part in his ceremonies, some of which included substances not permitted in Europe, such as the spirit vine, ayahuasca.  She  says “this is a remarkable man, spreading a message of love. He has a joyful spirit and this is infectious; just meeting and speaking with him will bring a smile to your face. His message is that we must learn to work in harmony with the earth and the natural world if we want a future on this planet, but he brings this not as a doomsday threat, but a very positive introduction to a new way of looking at the world. This is new to me, but of course very ancient to his people. Tchydjo has the special perspective of someone who has lived and worked with the forest all his life.  It has been a privilege to know him and I am delighted that he wants to come and visit us in Europe”