Our Aims, Our History:

It was founded, and is directed, by the Mapuche artist and filmmaker Freddy Treuquil. Native Spirit SCIO is an independent organisation run by volunteers and supports Educational projects in South American Indigenous communities. We work with the concept of “The New School”, a proposal for autonomous education based on an Indigenous understanding of life.

Alongside the annual Native Spirit Film Festival, Native Spirit holds special events, fundraisers and workshops throughout the year generating a permanent platform in Europe for a dialogue between the Indigenous world and modern societies.

We aim to Inspire new possibilities for understanding life, by celebrating the strength and potential of the human spirit.

This prophecy started to manifest long ago, and several encounters have come to pass throughout the years. In such gatherings, the memory of our ancestors and the ancestors of many peoples who lived in harmony with Mother Earth, are remembered.

There is a culture that has been imposed upon us: a fictitious world of ‘happiness’ through consumerism; a material world that has divided us as human beings. It has placed a distance between individuals and their peoples. By consuming double of what they recycle, consuming millennial woodlands and extracting from the womb of the Great Mother all that is considered of material value to be sold at the market, by poisoning the land so it can no longer support life, they are destroying the harmony through which we live.

The feelings of solidarity and respect among men, women and children mean being part of the whole human community, of respect towards Mother Earth.
It is here where such prophecy summons us all. Each one of us, in each ancestral culture, finds the same keys that open the spirit to understand Life. 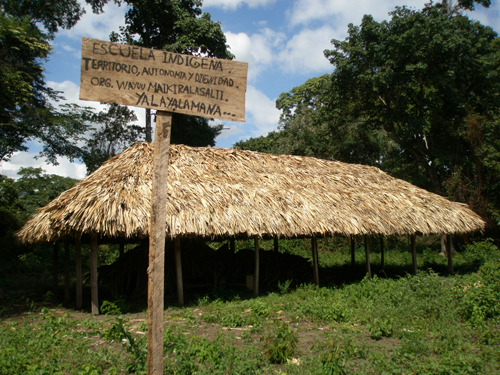 We work within the concept of La Nueva Escuela (The New School), a proposal for autonomous education within Indigenous communities based on an indigenous understanding of life.

The schools offer local indigenous children the opportunity to develop as whole human beings, as part of a community and culture, and as part of Nature.

It is not by chance that the surviving oases of biodiversity that exist on our planet today – spaces so crucial to the fate of the entire planet – are where indigenous communities live.

Indigenous people have kept alive an ancient culture based on a deep understanding and respect towards Nature (Mother Earth). This strong link with Nature and the cycles of life is reflected in every aspect of their existence.

However, Indigenous cultures are not removed from the wider world and globalisation has affected them too. One language dies out with its last speaker roughly every two weeks, taking with it the accumulated history and knowledge of that culture’s reciprocal relationship with the land.

Moreover, the extermination and persecution of Indigenous communities across the world over the last 500 years, has caused irreparable damage. Today this cultural genocide continues at the hands of multinationals and the exploitation of natural resources. Within today’s fast changing world, the surviving fragments of these ancestral cultures are at risk of disappearing totally.

A large percentage of indigenous children, in the regions where we work, cannot finalise their studies (even at basic levels). Once children complete primary school, in order to continue their education, they must leave their communities to study hundreds of kilometres away from their families in boarding schools. Furthermore, the education provided by the government is one that continues to integrate or assimilate indigenous people into the western world. These are the circumstances that contribute to the further loss of a culture rooted in nature and ancient wisdom.

The schools backed by the Native Spirit Foundation provide education that is vital in strengthening these cultures and communities. The New School – a project of Indigenous autonomous education – provides children with higher education, with particular focus on the arts and skilled trades. The schools also incorporate elements of modern technologies, incorporating technical resources from a non-Indigenous origin, at different levels.

Native Spirit Foundation supports projects initiated by communities themselves, in this way protecting their autonomy and building better relations between the so-called developed world and Native people. Since 2007 we have supported different projects in communities in Central and South America including; Wayuu in Venezuela, Mayans in Guatemala, Aymara in Bolivia, and Mapuche in Argentina and Chile.

Conscious of a widespread system that is based on the constant exploitation of nature, people and animal alike, Native Spirit believes in creating projects that contribute towards the building of a New Humanity based on respect towards each other and a harmonious existence with the Earth.

If you would like to find out more about our educational projects in Indigenous communities, please visit our CURRENT PROJECTS page