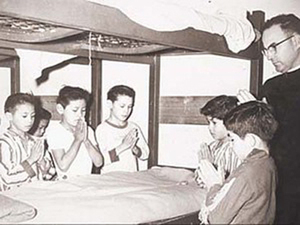 Rev. Kevin Annett from Canada, a co-founder of the new International Tribunal into Crimes of Church and State (ITCCS), will be reviewing his twenty year campaign to bring to justice the churches and government responsible for the genocide of Canadian Indian children.

Kevin will be reading excerpts from his two new books “Unrepentant: Disrobing the Emperor” and “Hidden No Longer: Genocide in Canada, Past and Present”

“Kevin is more deserving of the Nobel Peace Prize than many  who have received it in the past.” Dr. Noam Chomsky , Institute Professor Emeritus Massachusetts Institute of Technology

This documentary reveals Canada’s darkest secret – the deliberate extermination of indigenous (Native American) peoples and the theft of their land under the guise of religion. This never before told history as seen through the eyes of this former minister (Kevin Annett) who blew the whistle on his own church, after he learned of thousands of murders in its Indian Residential Schools.  Aboriginal children in residential schools tortured, flogged to death, deliberately electrocuted. Thirthy-three mass graves found in  Canada. DIR Kevin Annet, 110 mins, Canada