This is an unique opportunity to support the only Independent UK festival dedicated to Indigenous Film, Media and Arts. We’re keen to hear from people with a passion for Indigenous cinema who can commit. Send your CV to  [email protected] with ‘volunteer 2020’ in subject line.

INGRID PUMAYALLA (Trujillo, Peru)
Ingrid’s practice approaches identity and loss as a subjects to reflect on migration as a global phenomeno. Using photography, video and performance her work focuses in the fragility of identity and memory as a consequences of displacement.

D MOVIES.ORG
DMovies (Dirty Movies) is your platform for thought-provoking cinema; we bring to you the most innovative and audacious films from all corners of the planet.

TUMI
Taking its name from an Inca dagger, Tumi was founded in 1978 by Mo Fini promoting fair trade crafts and goods with Latin America. 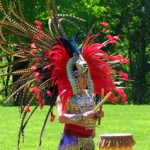 ATLACHINOLLI DANCE GROUP (Mexico/London) Atlachinolli (Burning Water) Dance Group is led by Xiquipiltzin who teaches cultural history of the people of the Americas, and changes brought about after European contact. He conducts a variety of Mexica ceremonies, shares knowledge of pre-Hispanic cuisine and brings a message of peace, cooperation and unity of all people.

THE NEW INTERNATIONALIST
With over 30 years of publishing under its belt, and more than 75,000 subscribers worldwide, the New Internationalist is renowned for its radical, campaigning stance on a range of world issues.

MOVIMIENTOS
Movimientos is an organisation dedicated to the promotion of Latin American culture in the UK and beyond; providing a platform for Latino artists living in the UK. It also works to provide a space for the organisations that promote awareness on issues relating to the continent.

KAUSARY
Formed in 1995, in the UK, Kausary has a repertoire of traditional Andean and contemporary Latin sounds. Styles typical of the Andean highlands, coastal lowlands, Amazon basin and forest, Cuban, Latin are all played with a depth of emotion unequalled.

BLACKFIRE AND THE JONES BENALLY FAMILY
Traditional Navajo Indigenous music from the Dine Culture (North America) by the Jones Benally Family, and political punk rock, from the three youngest member making up the band Blackfire.

KOGUI
Rhythms, dance and melodies from the Caribbean coast of Colombia – rootsy mix of African, Indigenous Indian and European flavours.