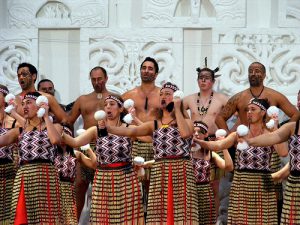 We are very pleased to announce that London based Maori club NGATI RANANA will join us to perform traditional HAKA at the 6th Native Spirit Festival. Two documentaries will be shown about Maori ceremonies and traditions; ‘Origins: A Maori Heritage Project’ and ‘Te Hono Ki Aotearoa’. Trish Stevenson introduces the second film about the making, launch and ceremonial handover of the Waka Taua (Maori ceremonial canoe) to Museum Volkenkunder, Leiden.

Since the late 1950′s, a small group of New Zealander’s living in London formed the London Māori Club and through the performance of traditional waiata and haka, the group promotes the uniqueness of Māori culture and keeps their language alive.

The three guiding principles of Ngāti Rānana are whanaungatanga (togetherness), manaakitanga (looking after one another/hospitality) and kōtahitanga (unity).