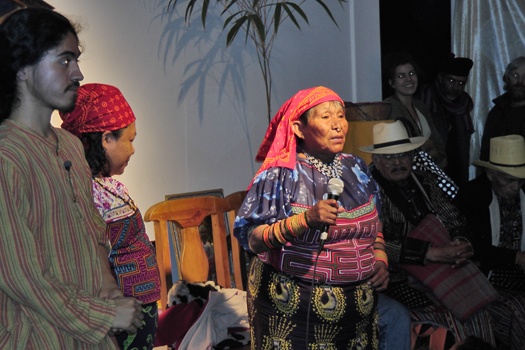 For a long time now, in different instances and in different places, indigenous peoples from north, central and South America have organised and met for gatherings and talks. It has been during these meetings that the memory of our ancestors is recovered. Among them is an ancestral prophecy, which says: “When the condor of the south meets the eagle of the north, children of the earth will be born. When the tears of these two birds merge, the children of the light will be born.” Native Spirit Foundation and work is part of this prophecy. 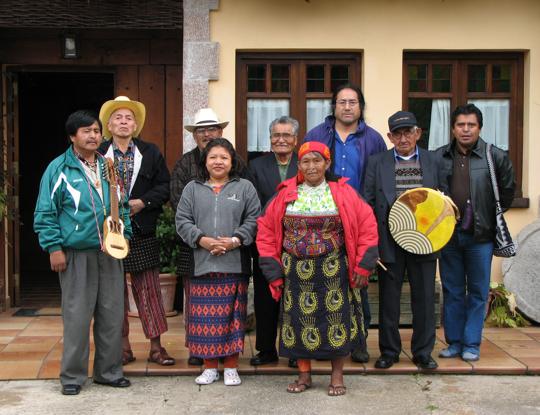 It is in this context that a group of indigenous elders arrived in Europe last October 2010 to share their message of hope and respect with the West. The group represented a variety of indigenous communities:  The Maya, Kuna, the Mapuche, & Aymara, and the eldest of them was 115 years old. They came to reaffirm the message that has been said by so many before them, that it is time to re-connect with Mother Earth in order to overcome a global environmental disaster. To construct a new humanity based on respect to all Creation and to reconnect with our spirituality and origins we need to open our hearts as well as our minds.

A month of activities – of conferences, workshops attended by university and school students, meetings and encounters with organisations and affinity groups such as ecological, community led and spiritual movements – in different cities of Spain and England, marked the busy agenda of the elders, who enlightened the spirits of all at each encounter. 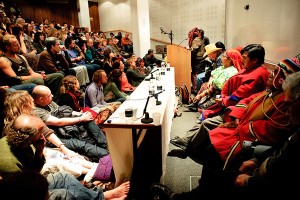 The European public had a lot to share in return, as the Mapuche elder Leonidas remarked: “I am going back with a full heart. Here I met many Mapuches” (people who, for him, share the philosophy of his people)
A great number of participants, more than two thousand, came to the different activities led by the indigenous Elders throughout Spain and England.

It has been a very fruitful visit to Europe for the elders as well as for all those who participated in their coming. The relationships that were formed between people and organisations, have create new and strong links that are bridging the two worlds. “We have encountered many people who orientate their life and work in the same direction as us indigenous; doing community work, respecting one another, forming educational projects in respect to Mother Earth, etc. These encounters have strengthen both us and them.” – Concluded Freddy Treuquil, indigenous Mapuche, in a final interview. 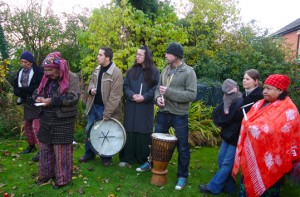 Their visit started in Madrid with a Conference at La Casa Encendida on the 15th October with the support of Fundacion Felix Rodriguez de la Fuente. The conference had a great impact on the public and was featured in the national press (see article “Indígenas latinoamericanos piden a Europa la reconciliación con la madre-tierra”, article published in EFE).

With the support of the Local government of Camargo and local enviromental organisation in Cantabria, APEA, the elders took part in a series of activities called “Jornadas de Sabiduría Indigena” these included workshops, talks, and meetings with government authorities and local organisations alike, covering the subjects of spirituality, sustainability, indigenous cosmology and prophecies.

Along-side their busy schedule the elders particularly enjoyed a series of workshops given to children at Schools around the Camargo region, this included a day at a school for children with dissabilities.

The Indigenous elders, the organisers of the activities – Native Spirit foundation & APEA – together with Camargo’s local government concluded, that this was a mutually rich learning experience and agreed upon longer term plans to strengthen this relationship of cooperation. (see article – in Spanish –  La Sabiduria Indigena tuvo amplio eco en Camargo )

The Mayor of Camargo, Angel Duque, invited local citizens to make the most of this remarkable opportunity; to learn from these “wise elders” and to apply their teachings before the so-called “developed world” finds a dead end in it’s relationship with the natural world. 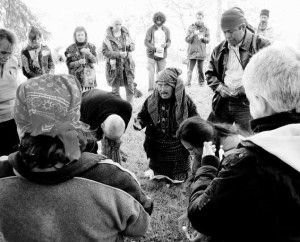 The elders visit to Spain reached an end at a meeting under a Tejo Tree of Corao where the organisations who participated in the visit together agreed upon creating a platform to defend Mother Earth under the name of “Circle of the Tree” (see article in Spanish – El tejo de Abamia tiende puentes, published by LNE ). This platform proposes a meeting point for the exchange of ideas about the environment and to construct future collaborations within this context. (visit link to Consejo del Tejo blog – in Spanish)

Ignacio Abella, member of the Conceyu del Texu, welcomed the initiative saying “Today is a great day”, and affirming that this multicultural encounter plants the seed for the future to create a global movement in defence of Nature.

The event concluded with a ceremony led by Mayan Kaxchikel elder and spiritual leader Casimiro Xicajau.

With these words, Basilio Quispe, an indigenous Aymara elder welcomed a crammed auditorium on the evening of the 26th October 2010 at a conference held at the School of Oriental and African Studies of the University of London.
At this gathering of more than 300 people, the elders reaffirmed the importance of reconnecting with Mother Earth, and the values of life such as respect, spirituality, community and family – which have been lost in modern cultures.

Freddy Treuquil, founder of Native Spirit and one of the speakers at the conference said: “In the cosmology of all Indigenous peoples, at every moment, the earth is considered a Mother; “We are in a great circle. In this great circle there is the tree, the child, the water, the women, the elder, within a great chain of equilibrium. But this equilibrium has been broken. In this path, we have arrived at a new cycle, as a new opportunity to humanity. The heart of humanity has been broken and we need to recover it. From this point of view we are delivering our message as Indigenous People” said Treuquil.

SOAS Student’s Union president Sebastian Uribe said: “We feel so honoured to be able to provide this space for the arrival of the elders. We felt the need to support and to help by giving a platform at a respected institution such us the University of London, for this message to be spread, a message that has been silenced for so long.It has changed the lives of many students and has changed my life too.”

” The indigenous elders confrence at SOAS last night was no doubt one of the best nights of my life. They have my heart.” said Rma, a member of the public

The delegation stayed for ten days in the UK, leading workshops for university students and school children. At a meeting with SOAS students, a longer-term partnership was agreed. The students agreed to support future visits of indigenous representatives to Europe, to share their teachings, and also to offer their support within indigenous communities developing educational projects. Their participation may include, amongst other things, internships where university students and graduates teach at the community schools. 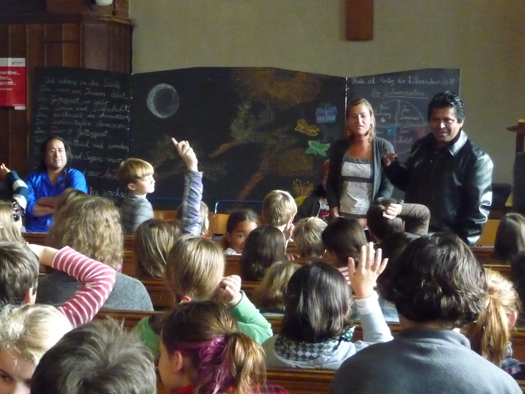 There was a workshop held with young people at IRMO – the Indo-American Refugee and Migrants Organisation, a community centre in Brixton, which helps Latin American immigrants and works with young Latino people. Another activity took place at the Waldorf School of South West London.

This was a cheerful morning looking at indigenous cosmology with plenty of participatory music and story telling. 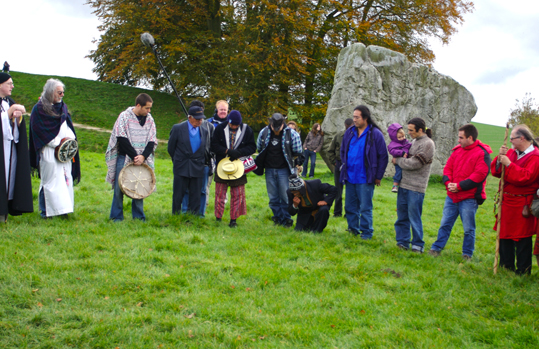 On the Night of All Hallows Eve, numerous ceremonies paying tribute the Mother earth took place amongst the standing stones at Avesbury, in Wiltshire. It was within these ancient stone circles that the Elders accompanied by the local Druid community, gave thanks to the Creator, marking the coming of the end of their visit to Europe.

The final conference took place at Zu Studios in Lewes, East Sussex, where an audience of over 300 people, made up of families from the surrounding communities, welcomed the delegation with great warmth.

Ramsay James, co-organiser of the event in Lewes said: “The event was organised and promoted in 3 days and the whole local community turned up! We’ve never seen so many people at one event at Zu studios. Indigenous peoples have a very important message to share with the western societies… People in the community haven’t stopped talking about the elders visit… the results of their teachings can be seen put into practice. We are very grateful and look forward to continue working with Native Spirit.” 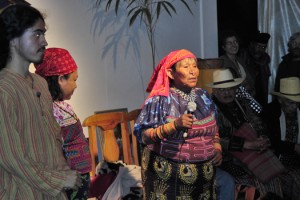 “We have forgotten to make payments, rituals to our Mother Earth. As Aymara we reclaim the need to teach our children the love and respect towards Pachamama” highlighted Juan Ramiro Quispe, indigenous Aymara representative from the delegation.

Fanny Avila, of the Kuna culture from Panama said that “it is important that we continue using our own language, our own clothes, our own traditions, our own way of being. We must respect each other. Many times we are discriminated for being indigenous. Ultimately we are all the same, we are all children of the same Creator. We are all brothers and sisters”

It was during this visit to Lewes that a series of ancient Mayan figurines – dating back some 800 years – were returned to the group of Mayan elders. Having kept them for over 30 years, the holders of these valuable artefacts said that they “felt the need to return them to the people to whom they belong”

In honouring their presence and efforts, the delegation of elders were awarded certificates by Sebastian Uribe on behalf of the University of London SOAS students.

“We are in the final part of a cycle of time called Ojshla Jush Bajud – a period of 5125 years. It marks the beginning of a new era, a new time. There is a lot of expectation at a global level, lots of fear. The 21 of December 2012 in the Mayan calendar, refers to the day of the Sun, the first day of a new cycle of time for the Mayan people. There will be changes at a planetary level that will have an effect on us humans. For us [Mayans] this signifies the flourishing of the cultures of the Earth” – said Victor Lem with Casimiro Xicajau, two of the Mayan elders, spiritual leaders and specialists of the Maya Tzolkin Calendar, at the conference in London. They felt the need, throughout the whole visit, people had in hearing from the Mayan’s themselves about the famous year 2012.

In response to the lack of accurate information and the interest that exists to better understand the subject of Mayan time – from the creators of the calendar instead – the Native Spirit Foundation intends to work towards supporting a meeting of Mayan elders. This group of wise Mayan elders will council and report back on an international level, their interpretations of this highly accurate ancient calendar.

Their message will form part of the upcoming 5th Native Spirit Festival, in 2011. 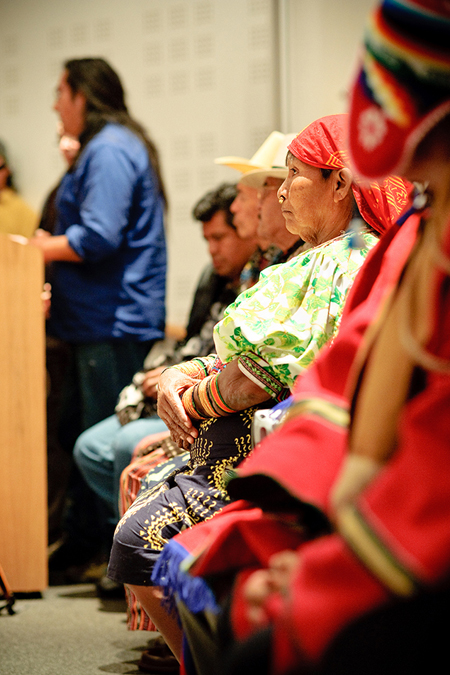