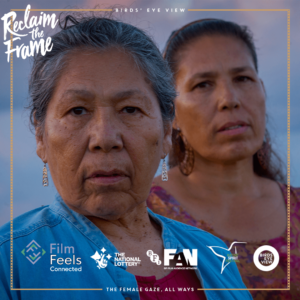 Covering a vast swath of northern Ontario, Treaty No. 9 reflects the often contradictory interpretations of treaties between First Nations and the Crown. To the Canadian government, this treaty represents a surrendering of Indigenous sovereignty, while the descendants of the Cree signatories contend its original purpose to share the land and its resources has been misunderstood and not upheld. Enlightening as it is entertaining, Trick or Treaty? succinctly and powerfully portrays one community’s attempts to enforce their treaty rights and protect their lands, while also revealing the complexities of contemporary treaty agreements. Trick or Treaty? made history as the first film by an Indigenous filmmaker to be part of the Masters’ section at TIFF when it screened there in 2014.

The untold story of American Indian Movement activists who fought for civil rights in the 1970s, and the children who served as their inspiration and their cohorts. The film is anchored by one of the Red Power Movement’s most outspoken Lakota leaders, Madonna Thunder Hawk, and her daughter Marcy Gilbert.

Jules sets out to find a place for her Cree Nation traditional placenta ceremony.

12 year-old identical twins Tapwewin (Truth) and Pawaken (Totem) have never cut their hair. In Cree culture, and in many Indigenous communities across Turtle Island, hair represents our sacred connection to AsKi, the Earth. Growing the hair is a manifestation of the growth of spirit.

This short film, crafted entirely out of NFB archival footage by First Nations filmmaker Caroline Monnet, takes us on an exhilarating journey from the Far North to the urban south, capturing the perpetual negotiation between the traditional and the modern by a people moving ever forward.

Ikwé. The word means “woman” in the Algonquin language, and the story is a mythological narrative of how knowledge is transferred from one generation to another. “The whispers of the moon tell me the ways,” the film says, and the imagery in the film is gorgeous, particularly a full-framed close-up of a woman’s face that has been painted red; the beauty of her physiognomy reads as a seductive and mysterious topography.

An experimental film that weaves the intimate thoughts of one woman (Ikwé) with the teachings of her grandmother, the Moon, creating a surreal narrative experience that communicates the power of thought and personal reflection.

This short film introduces us to Sébastien Aubin, a French-speaking member of Manitoba’s Opaskwayak Cree Nation. He works as a graphic artist for a living, but he’s embarked on a personal spiritual and identity quest on the side. Attempting to transcend the material world, he’s apprenticing in traditional Indigenous medicine with healer Mark Thompson. The relationship between the two figures marks the contrast between generations; between modernity and tradition. It makes the 360-degree turn from the values of the past to those of today strikingly apparent.

A Splatsin woman, Crystal Morris, seeks out to find traditional medicine to harvest and teach the next generation, including her daughter, Victoria.

Walking is Medicine is the story of the Nishiyuu walkers, six young Cree men who decided to trek 1600km from Whapmagoostui, Quebec, to Ottawa, in the spirit of their ancestors, whose traditions were to travel long distances in the winter because the rivers and lakes are frozen. This was an effort to meet with so many different nations from across the country and to be part of a new beginning.